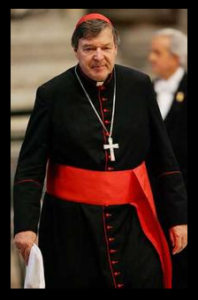 Retired Victorian Senior Crown Prosecutor and lecturer at the Australian Catholic University, Geoffrey Horgan QC has recently suggested that it would be hard for George Pell to receive a fair trial if indeed he was to be charged in relation to alleged child abuse.

If he is right, we have a serious problem.

While Victorian Police were still considering advice received from the ODPP weeks ago in relation to the allegations made against Pell that he assaulted young boys while serving as a priest in Ballarat and also later at a time when he served as archbishop in Melbourne, Mr Horgan believed that Pell could not get a fair trial because “the public has made up its mind”.

The argument proceeded on the basis that Pell is so well known and that so much “prejudicial material” has been made public, that it was impossible for the presumption of innocence to be effective.

Again, if he is right about that, we have a serious problem.

If that argument was to prevail, anyone who is well known or has a public profile as say, an industrialist, a politician, a sportsman, an entertainer or as a member of the clergy, would never be tried for a criminal offence. Clearly, the existence of a public profile can therefore  never be a legitimate reason to prevent someone being put on trial.

Further, in every crime that makes the newspaper headlines, the TV news or the social media, the public interest is excited and served by the details that are revealed. Those who would seek to prevent this would be forced to argue that no media, public or social, should be permitted to report crime, especially serious crime.

Some believe that “the public’s mind has been so poisoned” that Pell cannot get a fair trial. He implies that because child abuse has been proven in relation to others, that the public is therefore “poisoned” by that publicity and will hold it against Pell. This argument misses the point.

Can anyone really suggest that before these dreadful events were publicised, the “public mind” was indifferent to child sexual abuse? That it was because of these revelations only that people formed the view that child abuse is despicable and should be condemned? Surely every parent, every thinking adult or child feels a revulsion to this offence without any necessity for their feelings to be confirmed by evidence that it actually happens.

So some may well have had their feelings about the nature of the offence itself confirmed by these dreadful revelations, but to assert that therefore people have been “poisoned” against an individual is first, totally unverifiable and secondly, totally ignores what judges warn juries about in every single criminal trial in Australia – that they should judge each case solely upon the evidence that is presented against each particular accused.

If the argument is that juries are incapable of doing that, then the inevitable consequence is that we should dispense with juries. For if we allow that they can do it in some cases, then the same rules must apply in every case – including Pell’s.

The day that a policemen refuses to charge or indeed a prosecutor refuses to indict an accused because the accused is well known, is the day that the cynics will be confirmed in their view that there is one justice system for the famous and another for the rest of us.

The day that a policemen refuses to charge or indeed a prosecutor refuses to indict an accused because the case relates to an offence which has been publicised and is reviled by the public, is the day that the dissemination of the fact that these offences are being committed amongst us, will cease.

It has been decided that there is sufficient evidence presented to the ODPP to establish a reasonable prospect of convicting Pell of the alleged offences. In any such situation the law is clear that two things should happen. One, the Victorian Police should do their job and charge the suspect who now becomes the accused and two, the Director of Public Prosecutions should put the accused on trial forthwith. This is precisely what has happened in Pell’s case.