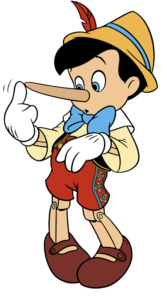 In this age of disappearing animal species, the degradation of our environment and the loss of such wondrous creations as the Great Barrier Reef, there has been a radical erosion in a basic human value that has been overlooked.

Truth, as a value, is now entrenched on the list of endangered species.

We have known propaganda, jingoism, mendacity and deception. We now live in a time of spin doctors, of fabrications, “false news” and “alternative facts”.

Our politicians tell us that babies have been thrown into the sea, real estate agents tell us of the “unlimited possibilities” of a house for sale, used car salesmen tell us about yet another car that has only been driven to church on Sundays, world leaders with hands on hearts assure us that the latest enemy really does have weapons of mass destruction.

Distortions and downright lies have become so entrenched in the fabric of our social, national and international intercourse that we accept as a truism that we cannot believe virtually anything that we read in our newspapers. We happily permit our politicians licence to put outrageous gloss on their public pronouncements with virtually no calling to account.

We know that our football hero is lying when he tells the tribunal that “he hardly touched me” as he adjusts the metal plate in his jaw.

We feel the need to threaten our citizenry who give evidence in court with imprisonment should they not speak the truth without contemplating what it says about us that the offence of perjury needs to be there at all.

We ignore our blushes when the film star says how much she just loves Australia and everyone in it, five minutes after alighting from the plane.

Not only is dissembling rampant, but professions and trades hide behind their own jargon the only purpose of which is to demonstrate how clever they are and how ignorant we are for not being “in” on the language.

The plain talking man may tell you that –

“It was the last straw that broke the camel’s back”.

However the lawyer will tell you –

“When a humped, long necked ruminant mammal of the genus Camelus has suffered a severe dorsal injury, the cause can invariably be identified as the single stalk of threshed grain that was most recently added to a large accumulation.”

The great enemy of clear language and often a measure of effectiveness is insincerity. Politicians talk about –

Language, knowledge, communication and effectiveness are interdependent and inextricably linked. The way language is used is not only a measure of the message but also a measure of the messenger. We judge our leaders in commerce, in politics, in religion and in all walks of life on how clear their messages are and how honest we judge them to be in their delivery of them.

Every profession has its own language. This private jargon is highly valued as a shield for as long as its members alone hold the key to the meaning of the language they use, then the rest of us have no choice but to turn to them at a cost, almost as a sub-species of interpreter. Has anyone over 40 years of age ever had an intelligible conversation with a computer salesman or repairer?

Why do we tolerate this and pay homage to those who have the lingo? After all, their communication style is simply a form of laziness. When a leader calls up some tried and true formulation of words that have been used for generations past, then that leader never has to put his or her imagination or brain in gear to actually think about what needs to be said. As a result they sell their audience short and at the very least, are ineffective as leaders.

By switching on the autopilot they turn themselves into an orthodox talking robot and descend into a state of oral coma. George Orwell said-

“Orthodoxy in all its forms is an excuse for unconsciousness.”

The misuse and abuse of language by those whose job it is to communicate but who succeed only in heaping mystery upon confusion, ambiguity upon doubt and fog upon haze, COSTS us dearly. Not only because words don’t come cheap but because understanding is priceless.

The more our leaders resort to what some imagine to be a sign of intellect but what in reality is no more than the shovelling of smoke, the greater is our need for honesty and clarity in leadership. As Lewis Thomas the American physician and writer put it –

“We can take some gratification at having come a certain distance in just a few thousand years of our existence as language users, but it should be a deeper satisfaction, even an exhilaration, to recognise that we have such a distance still to go.”