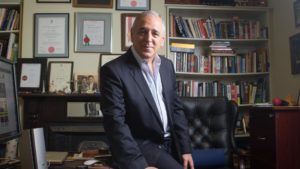 He is admitted to practice as a barrister in the High Court of Australia and in the States of Victoria, Western Australia, South Australia and also in Hong Kong.

During his career he has prosecuted and defended at both the national and international level in many high profile cases particularly in murder, corruption, fraud, drug and sex related cases .

Mr Pallaras’ extensive experience in Hong Kong included prosecuting in seven murder trials in one year and gaining expertise in international extradition law. He has successfully prosecuted cases of international fraud and international drug trafficking, in one case involving what was then the single biggest seizure of heroin in the world.

In 2000 he was appointed as Queen’s Counsel and in 2005 became the Director of Public Prosecutions for South Australia.

In 2010 Mr Pallaras was appointed as an Adjunct Professor to the School of Law, University of South Australia. He is a graduate of the Australian Institute of Company Directors.

In 2012 he was appointed as a Justice of the High Court and Court of Appeal in the Solomon Islands.

Throughout his career he has been awarded many commendations for excellence including those from the U.S. Justice Department, the U.S. Drug Enforcement Administration, the Federal Police of the Netherlands and the Hong Kong Customs and Excise Department.

In the international arena Mr Pallaras has held the position of Executive Committee Member of the International Association of Anti Corruption Agencies and was elected as Vice President of the International Association of Prosecutors. He has also recently been engaged by the Secretariat of the Pacific Community in addressing parliamentarians in several Pacific countries including Fiji, Marshall Islands, Vanuatu and Kiribati on issues relating to domestic violence and human rights. For his work in these areas Mr Pallaras has been described as a “Human Rights Champion of the Pacific.”